Barcelona for 4 days: What to see and where to eat

BARCELONA FOR 4 DAYS: WHAT TO SEE AND WHERE TO EAT
Has this ever occurred to you? The city, which you’ve been born and raised and consider as your home, has still some places, which you’ve never seen before or heard, for that matter. That’s what happened to me when I checked for routes and Barcelona trips for the upcoming visit of a friend who asked me to recommend her some places to visit in her way through the condal city. So I chose some places, which I consider they are worth to see, especially good locations for having a nice and delicious Spanish dish.

PLACES TO SEE
Maybe this sounds like a cliché, but Barcelona is where you can imagine Batman out of the Gothic City, where you can’t miss an architectural visit. The Catalan modernism is present in many spots of the city, and the best example is the Gaudí Route. Four days are enough to visit some of the most important buildings of the architect, such as:
– La Casa Batllo, in Passeig de Gràcia, is one of the most symbolic works of the architect Antoni Gaudí. It consisted on remodelling the antique building in the late nineteenth century for the residence of the Batllo family in 1904. The house is full of thousand extraordinary details, some even ghostly, that bring me back memories of a bad movie, Casper… You will have to empty your pockets because the adult ticket is up to 20.35€.
– La Casa Milà o la Pedrera is the current headquarters of Catalunya-La Pedrera Foundation, which means there will be many open doors for expositions. In my opinion, the most remarkable thing is to go up to the terraced roof and see Barcelona from the poshest/stuck-up avenue and the chimneys design, ventilation towers and stairs exits, all part of the naturalist stage of the Catalan architect. But first of all, get ready 16.50 € for the ticket.
– El Park Güell is maybe the place of the Gaudí modernist route that I like the most, perhaps because it brings me back to my first visit to Barcelona some years ago, or perhaps it’s just because it’s a big park where you can walk around for hours, if you want, you can have a little nap… But what most people come to see here, is the entrance, the perfect place to take a picture together with the dragon and after look for a place in the shade at Plaza de la Naturaleza, especially if it’s summer. It’s well worth to get lost in the park for a while, and all the viaducts included. Ticket price is 7€ and restricted to 400 people.
– La Sagrada Familia is the highest spot of Barcelona. It’s a superb work started by Gaudí, but later, it was being completed by many other architects, and in my opinion, it has lost the initial essence. I love the fact it is a sacred building out of the gothic canons that abound along Europe, therefore, it shows the imaginative and creative capacity of Gaudí. Every time I come in front of it I think I am at Edward Scissor Hands’ castle XD. This visit takes some time because you just can’t allow yourself to miss a single thing, the ticket is a bit expensive, but it’s worth it. Adult ticket is 13.50 €. 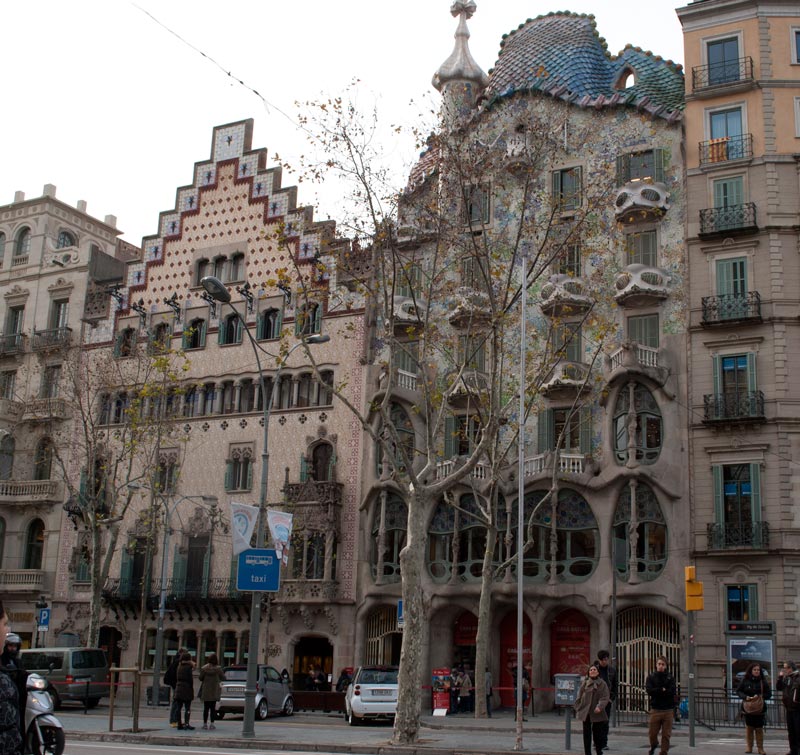 A very hopeless photo of La Casa Batllò (right). But personally is awesome.

La Sagrada Familia from the Gaudí Avenue in the morning, bad time for taking pictures.
I highly recommend dedicating one day for each spot. If you are running out of time and going fast, you cannot appreciate and enjoy the entire beauty of the place. You will need more than two hours to see all the La Sagrada Familia facade details, or if you want to go inside the temple. You can go other places that maybe don’t take so much time to visit the rest of the day:
– I’m not much into museums in Barcelona, except for the Museo de Historia de la Ciudad that is located in the Gothic Quarter. The best point of it, in my opinion, is that you can discover the history and the development of the city along the years, besides the museum is built upon the remains of the ancient Roman forum, when Barcelona was known as Barcino, and it’s a pretty nice structure, too. Also, you can find the Roman Temple from Augustan Age, which is not very far from there.
– The lightning strikes are spectacular during the night in Plaza del Rey. I’d personally consider that’s the most beautiful spot of the city.
– You might as well get lost in the Jewish Quarter streets. They are a real labyrinth, filled up with antique shops and curiosities.
– A bit far away from the city centre is located the most visited museum of Catalunya, the Camp Nou… for those who love football and want to see the stadium of the best football team XD.
– The Royal Palace Gardens are near to the Camp Nou. It’s good to rest a bit under the shade of the trees. Barcelona it’s so warm in summer…
– I really, really love cathedrals, so the Basílica de Nuestra Señora del Mar at Born Quarter is a must see. I do not know why I feel so attracted to it, maybe it’s because of the feeling of getting back in time when you are in the square in front of the facade. You can easily imagine yourself in the middle of the fifteenth century, with the background sound of the ringing bells and the doves flying around. Dunno, I just love it.

TAKE A BREAK TO EAT
Can Culleretes, in Ciutat Vella, claims for being the oldest restaurant in Spain, at least, that’s what Guinness World Records book says about its foundation in 1786. The restaurant offers a wide and varied menu of Catalan, Mediterranean and Market food, not available for all pocket sizes. The menu for groups starts from 22.50€ per person.

El Pla de la Garça is located in the former stables in Bona Sort Inn at Born Quarter. The establishment is unique, but not more than the Garum terrines (a preserved dish made of olives and anchovies date from the Roman times) on the menu; this recalls me the maritime trade in the Roman Mediterranean. That, plus the seasonal cheese starters from the various regions of the Catalan Countries, and also from the rest of the Iberian Peninsula, of course.

4 gats is a modernist style bar where you can enjoy a good beer, some toasts or a tasty escalivada to share. Thanks to its location in the Gothic Quarter, you can make a stop for a rest, while making your way through the narrow medieval streets.

La Muscleria is designed for the seafood lovers, especially if you like mussels served in 50 different ways. This is what u can find in this establishment located in Eixample, a stopping point while you are walking along the architectural route through the neighbourhood. And for those who don’t eat seafood, like me, and I would do it if I wasn’t allergic, there are also some no-seafood dishes, what makes easiest the idea of going with someone with a craving for mussels…

La Palma, in the Gothic Quarter, is a neighbourhood winery which does not even have a sign on the door. It’s a nice place to drink some wine accompanied by some tapas, like some croquetas. The place has personality and charm.

My favourite place if you want to go out for a few tapas is la Barceloneta, and I do not mean the Borbón Avenue, you must go deep into the allies of the neighbourhood. And if you want beer, just go to El Vaso de Oro. El nou Ramonet, El Lobito and Cheriff are located on Ginebra street. Just a few tapas, especially the croquetas, are enough to soothe the stomach after a long day sightseeing the city.

If you’d like to take a really nice coffee, there’s no better place than El Gran Café in Avinyó Street. The best of it is that it’s located in the Gothic Quarter and it’s a good stopping point for resting between the allies, that end on la Ribera neighbourhood, where there are a lot of little shops and stores and they’re very interesting too.

La dolça Herminia is a very comfy spot that serves market food decorated in a modernist style, which its presence could be seen on furniture and plates. The best here are the snacks and starters, and a good fish dish does make you stay hungry for a bit more because you just simply cannot choose what to eat first.
Finally, if you want to try a thousand flavours-type of a restaurant or just want to go gastro-shop, you can’t forget about La Boquería Marquet, it’s a little bit expensive, though. People that easily go into panic mode must know that a little guanábana could be around 30-40 €…

To help you to find all these different places, here you have the exact location on the map, or if you want to keep it on your phone, iPad or wherever you like. Have a good visit!

This entry was posted in Mini guias